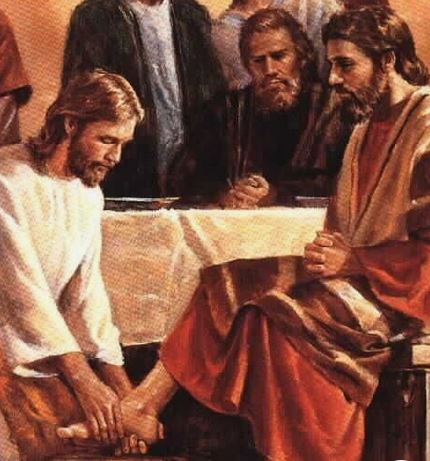 The book of Revelation is addressed to Jesus’ bondservants. The Apostle Paul described himself as a bondservant, a slave for the sake of Jesus: "For we do not preach ourselves but Christ Jesus as Lord, and ourselves as your bondservants for Jesus' sake. (2Cor 4:5 NASB95).

Jesus said: "So YOU too, when you do all the things which are commanded YOU, say, 'WE are unworthy slaves; WE have done [only] that which WE ought to have done.'" (Luke 17:10 NASB95)

The word bondservant basically means slave. You won’t hear many sermons about becoming a slave, for Jesus’ sake, but it is the gospel truth.

The scene is heaven. The saints have been raised and God has wiped away all our tears. He has healed all our pain, as He has drawn us to Himself.

Millions and billions of redeemed saints have gathered. The crowd stretches beyond the horizon. Everyone is waiting expectantly, wearing their finest apparel. The glory of the Lord is present, and the time has finally come for God to reward to His faithful servants.

All the lesser awards have been given. It is time for the highest award in all heaven. The atmosphere is electric, and everyone is sitting on the edge of their seats.

Everyone in the crowd is wondering “Who will it be?” “Do you think they will be the one?” Hesitantly, names and their merits are discussed. Those who are renown preachers, prophets and teachers are strangely still and silent as they consider what they might say if chosen.

A hush spreads through the mighty assembly as Jesus Himself comes to the stage to present the final award, the highest honor in all heaven. Jesus motions for everyone to sit as a smile spreads across His face. The light from His face is so bright that few can look upon it. As he takes the envelope from the Father, the crowd holds its breath in silent expectation. It is so still, that everyone could hear the envelope being ripped opened.

As Jesus sees the name, He nods His head slowly and knowingly as He looks at His Father in love, tears streaming down His face. “Homer Snodgrass” Jesus says in a loud voice that echoes throughout heaven.

A stunned silence spreads through the crowd, followed by whispers as each person asked his friend: “Who did he call? Is it possible I misunderstood Him?”

They wait, but no one responds to Jesus’ call.

Was this a mistake? Could mistakes happen in heaven? Or was Jesus testing them?

Again, His call receives no response, and more whispers follow.

Jesus touches the shoulder of an angel standing near Him and whispers something in his ear. The angel instantly disappears. After a few minutes, he slowly returns, half-pushing, half-dragging a very embarrassed little man who is dressed as a janitor. He is holding a broom and doing his best to hide behind it. His face is crimson in embarrassment . . . until He sees Jesus.

The moment he sees Him, his eyes lock on Him and his face glows. Homer crumbles before Jesus and kisses His feet, tears of love streaming down his face. After a few minutes, which seemed like hours to the stunned crowd, Jesus gently kneels down, lifts Homer, and holds him close. Homer’s tears increase as he looks at the scars in Jesus’ hands and feet. Jesus lovingly wipes Homer’s eyes and holds him close again.

“Who is this person Jesus loves so much?”

Homer slowly turns and disappears into the crowd, and Jesus turns to leave. It is over.

Peter, who was sitting on the first row, blurts out in amazement: “Is that it? I don’t understand what just happened. Please tell us!”

Jesus stops and turns, His love and tenderness evident as He looks at His friend. “Homer was a custodian in a small country church you’ve never heard of. He was capable of much greater things, but he gave them up because I asked him. I never gave Homer much to do, but he loved me more than anyone else. He became a servant. He was content to be unknown, and even thought to be beneath everyone’s notice. He did not care, but focused everything to serve Me. Everything he did, he did for Me. When he helped someone who was hurting or afraid, he did so in my place. In his mind, he was ministering to me, worshipping Me with every act of kindness. When he polished the floor, he did in love for Me with all his heart. With every stroke, it was as if he were caressing my face.”

“No one noticed or appreciated Homer. They never considered all the hard work he did. They expected it. In fact, they often complained that he was paid too much. If anything went wrong, he was usually the first to be blamed, even though he’d done nothing wrong. Once, some young boys snuck into the church and tracked mud onto the carpet. Homer was blamed and the damages were taken from his small paycheck. He never tried to defend himself. On several occasions the deacons discussed dismissing him.”

“Homer was content with the little I gave him. He gave most of it away to those in need. And when He went into his closet to pray. I could not refuse him. Anything he asked for, I gave Him.” Jesus then looked over the great crowd and started pointing. “I healed you, because Homer prayed for you.” To another: “I moved heaven and earth until you finally surrendered to Me. Homer is the reason you are here today.” To others: “Because of Homer’s prayers, I gave you a great ministry that reached millions. Homer believed in you and overlooked your faults.”

“Homer never looked for fame or recognition and he never received either. He loved me and trusted me, enough to serve others . . . just to please Me. His life was not easy, he was maligned and overlooked, he faced personal tragedies alone, without any support or comfort from the people he gave his life to serve. He shared My pain and loved me through it all.”

My wife, Janet, was in a terrible automobile accident. She sustained multiple injuries, including a severe traumatic brain injury. She almost died. She was in the hospital for over 5 months before she was able to finally come home. Even then, she was on a feeding tube and could not walk or talk.

As part of the brain injury, she experienced terrible cramp-like muscle spasms in her legs and lower back every twenty to thirty minutes. They were very painful. Rubbing her legs was the only thing that helped.

Nights were the worst. I was unable to sleep for more than about 30 minutes at a time. I was exhausted.

One morning, as I was walking into my study, I told the Lord how tired I was. I was not complaining, I was only sharing. Jesus tenderly held me as asked me, “Do you want Me to come and rub her legs for you.” I cried. I was so ashamed, knowing that the Lord of all the earth would put on the garments of a slave and serve us in that manner. I knew that He would. Instead, I asked Him to help me to have the strength to help Janet. Jesus then asked me to rub her legs for Him.

This made all the difference. I was no longer serving Janet, but I was serving the Lord of the Universe. I began to understand that I was not rubbing her legs, I was rubbing His legs in an act of worship.

Make it your prayer and goal to humble yourself and to serve others, solely for sake of Jesus, purely out of love and appreciation of Him. That is what Jesus did and continues to do for us. Be content even if no one appreciates you or recognizes your service . . . or if they malign you and persecute you for His sake. “Rejoice and be exceedingly glad, for great is your reward in heaven, for so they persecuted the prophets who were before you.” (Mat. 5:12 NKJV)